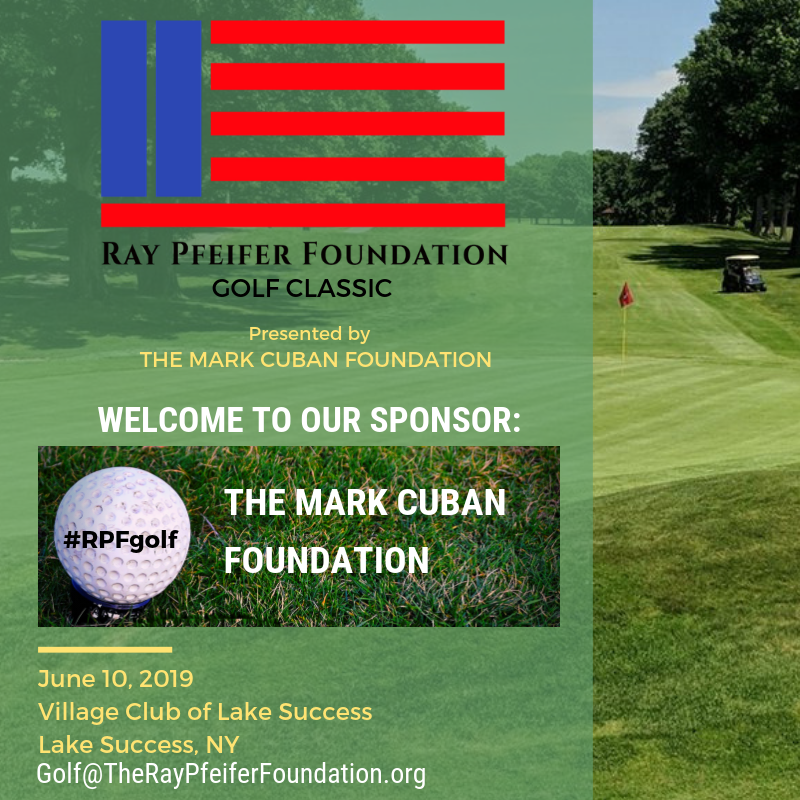 NEW YORK, N.Y. (April 23, 2019) — The Ray Pfeifer Foundation Golf Classic, which provides 9/11 first responders with medical needs not covered by insurance, announced today that The Mark Cuban Foundation will be the presenting sponsor for the 2019 event. The celebrity golf tournament/fundraiser is set for Monday, June 10 at the Village Club of Lake Success in Lake Success, N.Y.

The Ray Pfeifer Foundation was established in the memory of Ray Pfeifer, a NYC firefighter who died on May 28, 2017, from the cancer he contracted after working as a rescue and recovery operative for eight months at Ground Zero. Pfeifer was a leading force for ensuring health care coverage for the estimated 75,000 people who need treatment from health conditions caused by 9/11 exposure. According to the FDNY World Trade Center Health Program, there are over 2,000 active and retired firefighters currently battling 9/11 cancers and other illnesses. The Ray Pfeifer Foundation helps these people by purchasing motorized scooters, portable oxygen tanks and other equipment, and by providing home health and hospice care, among other needs.

The second annual Ray Pfeifer Foundation Golf Classic presented by The Mark Cuban Foundation, includes a buffet breakfast, an afternoon of golf, lunch on the course, cocktail hour, auction, dinner and awards ceremony. Individual golfer slots are available for $1,000 per person. Non-golfers are invited to attend the post-tournament cocktail hour, auction, dinner and awards ceremony for $375 per person. Foursomes and sponsorships at various levels are available by contacting the tournament at Golf@TheRayPfeiferFoundation.org. The inaugural tournament raised $104,000 in 2018.

“I became aware of the Ray Pfeifer Foundation through a Shark Tankpitch by the children of a 9/11 rescue and recovery worker who died from cancer,” stated Mark Cuban, the billionaire philanthropist and TV personality. “The cause blew me away and it fits the mission of The Mark Cuban Foundation. We hope others will get involved.”

“Ray Pfeifer was a member of Engine 40 on Manhattan’s Upper West Side. Engine 40 and Ladder Company 35 lost 12 members from their firehouse during the rescue operation on that fateful day 18 years ago,” said Craig Paupst, President of the Ray Pfeifer Foundation. “His prodigious work in pursuit of this cause lives on through the foundation. This critical work changes the lives of these first responders who gave so much in the wake of that tragedy.”

The 2ndAnnual Ray Pfeifer Foundation Golf Classic emcee will be Meteorologist Amy Freeze at WABC-TV Channel 7 Eyewitness News.  A special award will be presented to Jennifer McNamara and her son Jack of The FDNY Firefighter John F. McNamara Foundation in recognition of their work, including advocating for an extension of the World Trade Center Health Program (James L. Zadroga 9/11 Health and Compensation Act).

Further information can be found at www.theraypfeiferfoundation.org.